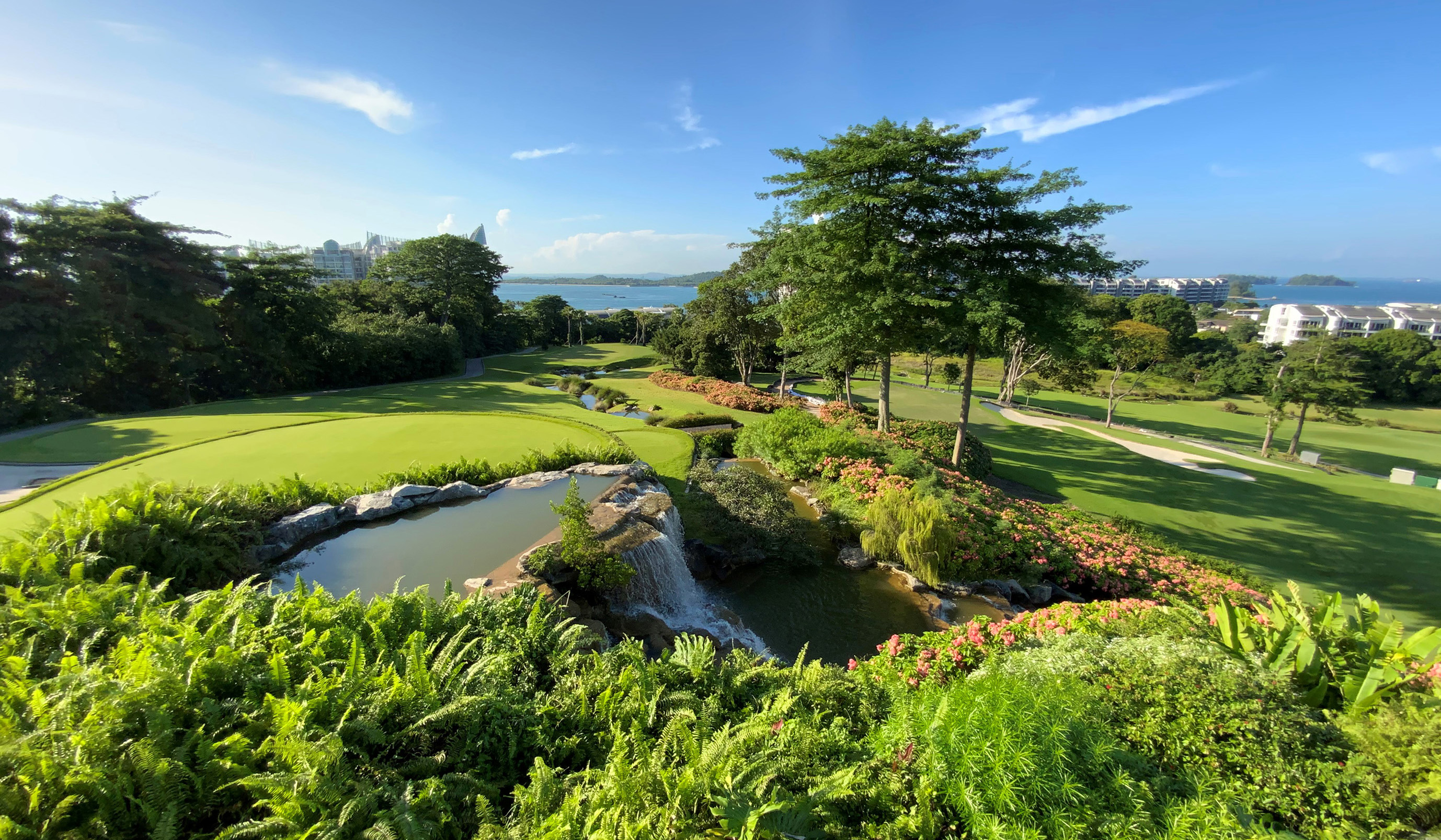 Taking Sentosa to the top

Years in the making, and even more in the execution, Sentosa Golf Club's rise to prominence has been a carefully crafted plan. Raising it through the levels on and off the course is General Manager, Director of Agronomy and Resident Golf Course Architect Andrew Johnston. He sat down with Blair Ferguson to talk through his journey of taking Sentosa to the top.

Sentosa is one of Singapore's most established golf clubs. Over the last four years, it has gained global recognition for its sustainability initiatives and exceptional championship courses, The Serapong and The Tanjong.
Since 2005, they have hosted the Barclays Singapore Open (2005-2012), SMBC Singapore Open (2012-), HSBC Women's World Championship, Asia-Pacific Amateur Championship and the Women's Amateur Asia-Pacific. Numerous awards have joined these events, recognising their work on sustainability, as well as the title of 'World's Best Golf Club' at the 2019 World Golf Awards.

‍
This journey has been under the stewardship of General Manager, Director of Agronomy and Resident Golf Course Architect, Andrew Johnston, since 2011. Designing over 100 golf courses around the globe while working for Arnold Palmer, Gene Bates, Fred Couples and his own company, plus a turf degree from Michigan State, moulded Andrew into the perfect person to take Sentosa to the next level.
Confident, detailed and humorous, he has learnt from his experiences at every stage. Starting with the guidance of his early mentor, Kevin Adams, and growing from milestones such as project managing his first construction for Arnold Palmer at Australia's Sanctuary Bay.
Among everything that he has achieved in Singapore, pinpointing the culture necessary to facilitate change is one he clearly regards as his most significant. By working to a TR365 (tournament ready 365 days a year) mantra, himself, Superintendent Rodney McKeown, the 75 strong agronomy department and wider Sentosa team have transformed the Club.
Andrew's same drive and belief started the Club's road into sustainability, which it is now renowned for, starting with a single-head control irrigation system.
"I knew that single head control gave you better control of your water from a golf course architect's point of view," Andrew explains. "I've built and designed enough golf courses in areas that have really struggled for water availability to know that you could reduce your water consumption by 40-60% with single head control.
"Again, people look at me and go, 'how is that possible?' A golf course with topographical contouring to it has high spots and low spots. High spots might need seven minutes, but low spots might only need 30 seconds because water runs downhill. If all heads are tied together in stations of two or three, you've got no choice but to run everything at ten minutes or whatever time you have set, so you're over watering.

‍
"I'm a freak about water. We have the most sophisticated system in Asia right now, but I don't even let them turn it on until we have to. We drag hoses and just put them on the spot that needs it, even on the greens, I say to the guys, “understand the green”. There's a culture within the culture. It is usually the high spots that will crust off first, but the whole green doesn't need water. And too much water is what sucks the roots up and means the plant doesn’t develop that deep root system. And if we can go 10 or 15 days without turning a head on, we will."
After starting with water, attention turned to single-use plastics. Bottles were the first target - with 300,000 saved over two years - but the number of single-use plastics at the Club soon became apparent. Four years into operating without any on-site, the Club has made significant strides in other areas. It has introduced bee colonies, reduced fertiliser applications, product applications and is currently working with a local university and GEO Foundation to develop a calculation for carbon sequestration of grasses and trees.

‍
This could help solidify the Club as carbon neutral and confirm their ultimate goal. For Andrew, it could also give them the credibility to be a complete roadmap for others in an industry where they are already leaders.
The aims of sustainability and TR365 are one and the same on the course. Along with GPS sprayers, biochar, and other methods, Sentosa has been an early adopter of sensors. But, as with any new technology, they have seen it develop and are now installing Soil Scout's into every green on their two Championship courses along with selected tees, fairways and roughs.

‍
"I'm all about tech and understanding data," Andrew begins. "Without the knowledge of this technology, then you can't improve. It is good to have hands-on intuitive skills, but you still need data.
"Picture this. I have four greens that are very close to each other. Hole 1, then hole 2, which sits down in a hole and is a par three, is right behind it. Next to it is hole 7, and then left of hole 1 is 8. So, four greens together with different elevations.
"Number 2 is in some kind of decline, and we can't figure out why. It seems like it's melting out a bit, and we're sending tissue samples and soil samples off to the lab. We've done nematode assays, and nothing adds up. Nothing points to an issue, but it is physically thinning and going downhill. We're watching it day to day, and it's been going on for about three weeks.
"I'm scratching my head, and I happened to pull up the dashboards of the soil sensors on my phone, and I see that 1, 7 and 8 are all the same temperature and 2 is ten degrees hotter. It sits in a hole and, with its axis, points at the sun as it rises and sets. So, it's got full sun all day, and it was the hottest time of year for us with little cloud cover.
"Basically, it was getting too hot. So, we moved in a Turf Breeze fan and came back an hour and a half later and looked at the dashboard, and everything had levelled out. Air movement over the top provided the cooling the soil needed, so everything equalled out. In about two weeks, it had improved, its density was coming back, the plant was feeling healthy, and it didn't take a fungicide or NPK – all of it was environmental.

‍
Confidence in the solution

‍
"We wouldn't have figured that out without a sensor that gave us the information we needed to make the right intuitive decision to change the environment. They are really valuable because they give us information that helps us, as premier turf managers, to analyse and make decisions that can put you in that ‘TR365 position’.
"Now that we've gone to the Soil Scout version, which I feel is more reliable and has more background to it, I feel even more confidence in it.
"I think they are extremely valuable to understanding all the little things. You can't come to work every day and just make decisions by the seat of your pants and expect it to look like what we look like every day."
Providing Sentosa with the Soil Scout solution is Centaur Asia Pacific, who has built a relationship with the Club and is delighted to work with them on this project.
"Since we started distributing Soil Scout, we knew that we were partnering with a company that has something very different from other underground sensors we have seen before," explained Bryan Littlejohn, Business Manager (Sales & Services) for Centaur Asia Pacific, Singapore.
"The reliability of the product and the sensor's capabilities to send data consistently is second to none. The backup support provided by the team at Soil Scout is exceptional and gives us all the tools and resources we need to service our new and existing customers accordingly.

‍
"We are very proud to be supplying Sentosa Golf Club with the Soil Scout solution, thus allowing their Agronomy department the real-time data required to make more informed decisions on the exact time to apply water and helping reduce their overall water consumption. Sentosa Golf Club is renowned for providing world-class playing surfaces, and it's very exciting to be associated with such a prestigious facility."
TR365 was last put to the test in early March 2022 at the HSBC Women's World Championship, where the top LPGA players competed over three days on Sentosa Golf Club's The Tanjong golf course.