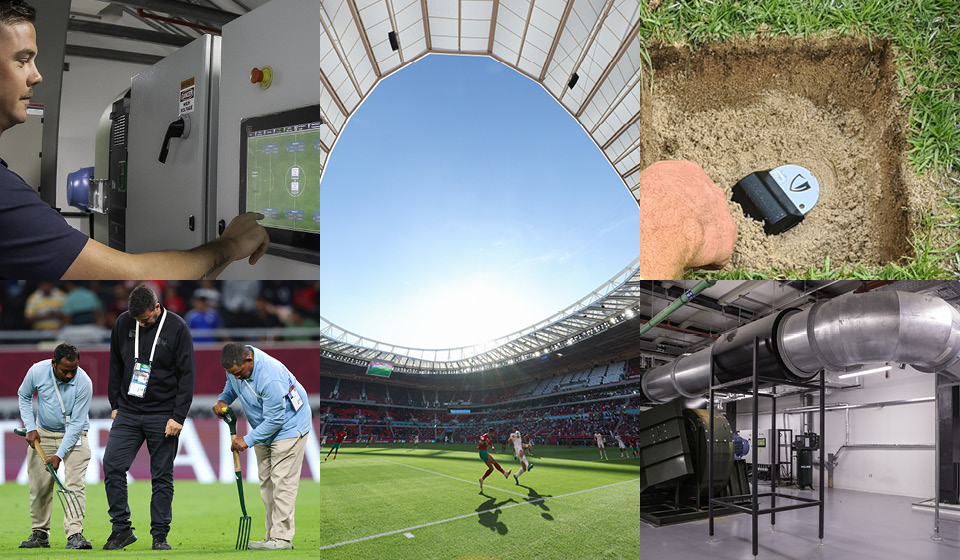 Few events require precision more than the globe’s major footballing spectacle. Everything from the placement of the goals, width of the lines and moisture of the soil goes into making a pitch for the world’s best, and in Qatar, it’s being achieved using SubAir and Soil Scout.

Blair Ferguson spoke to Bernhard and Company’s Turf technologies Business Development Manager Steve Wilson to find out how the installation went and how the Qatar stadiums are utilising their SubAir and Soil Scout solutions.

"You get to work on a match day, and the pitch is within the set parameters automatically. SubAir and Soil Scout work hand in hand and that allows the pitch manager to relax"

If precision is the aim of the world footballs governing body, then SubAir is almost the literal foundation it is built on for pitches. Operating below the surface, the vacuum and ventilation system is in place at all eight stadiums and is, and continues to be, a crucial part of pitch management.
Bernhard and Company's Turf Technologies Business Development Manager Steve Wilson is heading up the relationship between Bernhard and all parties from the Qatar side. Working out of Manilla in the Philippines, Steve has been the primary contact between Bernhard and Company, the Qatar Supreme Committee, the world football governing body and various contractors, consultants and management since 2018.
The proud Canadian will be in Qatar as tournament support for grinding and SubAir whilst his home country of Canada and 31 others compete to become world champions.
The success of the pitches ultimately comes down to the preparation, and that involves implementing the best technology available to grow grass in the desert.
Initially, the SubAir and Soil Scout combination was taken on as insurance, but the real-time data, unique stadium proximity and desert conditions soon provided interesting data that changed how the system was used.
Steve explains: “Getting started in Qatar, everyone thought of SubAir as water removal and insurance. If they are going to get rain, typically, Qatar will get it in November. So you think on a global scale, even if there is a one-minute delay of a football match because of rain or moisture, the knock-on is huge.
“Then you’ve got the safety aspect. If you’ve got a game, there can easily be two hundred million dollars worth of players on the pitch. So you want to make it as safe as possible.

"With Soil Scout, you're seeing it in real-time, and it's continuous whether it's midnight or four in the morning; It's a continuous stream of data"

“Realistically, with SubAir, all we move is air using pressure or vacuum. By going into vacuum, the by-product is water coming with it, so we remove water. And moisture removal is what SubAir is most famous for. What we’ve learnt, and we didn’t know this going into Qatar, is how beneficial pressure would be.
“Going into pressure, we get an air exchange and take out bad gases and replace it with good gas. When we go into vacuum, we’re dropping 2% moisture per hour and things like that, which we suspected, but we would never have confirmed without the sensors.
“But the most important thing we’ve learnt is pressure in the desert environment. We’re forcing air in, and we’re able to keep the moisture in the root zone longer. So rather than gravity pulling it out and going in the drainage and leaving the soil profile, we’re running pressure, and we’re able to monitor that, and we can see live that the percentage of moisture is staying there longer when we’re in pressure. And Soil Scout has given us the ability to monitor it live.
“We can see the moisture levels and act accordingly to dry the roots or keep the moisture. So it just allows you to control that root zone without disrupting the surface. Typically if you wanted more air, you’d have to punch holes which can damage the surface or the stitching, which is an expensive investment.

“Now we can manage it without touching the surface. Then having Soil Scout means we’re not guessing. There’s no thinking it’s too dry or too wet. The pitch manager has actual data to base their decisions on.
“If it rains overnight, we can turn on an automatic system, so if the moisture level on the Soil Scouts gets too high, the SubAir can turn on and pull the moisture out.
“As a pitch manager, you don’t need to have sleepless nights worrying about thunderstorms and rain. You can sleep like a baby, and the system will turn itself on through the Soil Scouts and pull the moisture down.
“You get to work on a matchday, and the pitch is within the set parameters automatically. SubAir and Soil Scout work hand in hand, and that allows the pitch manager to relax.
“It’s all data-driven, and you can’t argue against data.”
The data-driven approach between Aspire, who run and operate the sites, and the tournament organiser has been prevalent, and the use of the data has grown, but the real-time aspect is proving most valuable.

Twelve sensors are installed in the already constructed pitches in just over an hour using a turf doctor. These are placed at the corner of each 18-yard box and then horizontally adjacent on the centre line at depths of three and six inches.
As mentioned by Steve, the data informs decision-making, and in the case of over seeding, it has been a vital tool.
In seven of the eight stadiums, the air conditioning systems were used to bring the soil temperature down from 30 to 35 degrees Celsius to 24 and 26.5 in the upper root zone during September 2022. This was done to make the paspalum dormant and aid the over seeding of ryegrass.
By monitoring the soil temperature using the sensors, the perfect time to over seed was chosen with an almost guaranteed germination and uptake with no paspalum resistance.
Whilst an invaluable use of the technology, Steve sees a bigger picture for the dashboard and how automation can aid the pitch quality during this tournament and the next edition in America, Canada and Mexico.
“Aspire is going to have a headquarters where they are going to be monitoring all stadiums during the tournament” Steve explained. “They want to set up a dashboard with a central control which will have all eight stadiums.
“They could have soil temperatures, moisture and salinity for every venue. I think that is huge, and I think they can pull it off. I think it’s something for future where you can say to tournament organisers they could have this dashboard at their headquarters and see every stadium for the US, Canada and Mexico tournament. You’re across such a crazy environmental zone there that it would make a huge difference.
“I think it’s incredible that they can sit anywhere in the world and have a dashboard that shows all their real-time stadium data. They can make decisions on irrigation based on the data and make good decisions.

"As a pitch manager, you don't have to have sleepless nights worrying about thunderstorms and rain. The system will turn itself on through the Soil Scouts and pull the moisture down"

“Even golf management companies could use it. Imagine having it on 140 golf courses. Having all of that information there and being able to apply parameters on soil moisture that gives you a flag when it’s too high or low is so valuable.
“Soil Scout has that technology, and it is incredible. There’s nothing stopping them from using it for training pitches, either. Maybe you don’t use 12 sensors, but enough to get an overview.
“What’s also important is the software is really easy to use. We’re sitting here live, and I can show you what’s going on and control the systems, and we can see how they are using the system as well.”

Qatar has been a unique opportunity to work in desert conditions but also in eight stadiums that are so close to each other. The furthest distance between two stadiums is 45 miles and that provides a one-off opportunity to study the stadium effects on pitches.
“All of the pitches are similar. They are all stitched hybrids. Seven are SIS Grass, and one is GrassMax. But they are all basically in the same growing environment, same soil media, same grass paspalum base, and over seeded to ryegrass,” Steve explained.
“Surprisingly, the data we get from each stadium does vary even though they are close together. We have one stadium, and for whatever reason, it seems to drain faster than the others. Another one is coastal, and it seems to hold salinity, so when we go into vacuum to draw the moisture out of the root zone, and salinity drops with it.
“So again, having Soil Scout allows us to see that in real-time. The old system of running around with a moisture meter – you’re not seeing it in real-time. You go and do it now and then five hours from now. With Soil Scout, you’re seeing it in real-time, and it’s continuous whether it’s midnight, four in the morning or whatever time it is; it’s a continuous stream of data.
“We turn our system on, and we can see real-time changes. As the moisture draws down, does the temperature change? Does salinity move? It gives you the data to manage and make decisions based on what is actually happening.

“I think having that number of stadiums in close proximity, we’ve learnt a lot that we wouldn’t have done elsewhere. We can see that stadium has been run for six hours in pressure, and we see what’s happened live with the moisture. Then we have another one down the road that runs vacuum, and we can compare that.”
Using the leading technology in the business, all parties have honed surfaces befitting of the event. As well as informing pitch maintenance in the region, the approach can be scaled up for the future and ensure turf quality at major sports events for years to come.