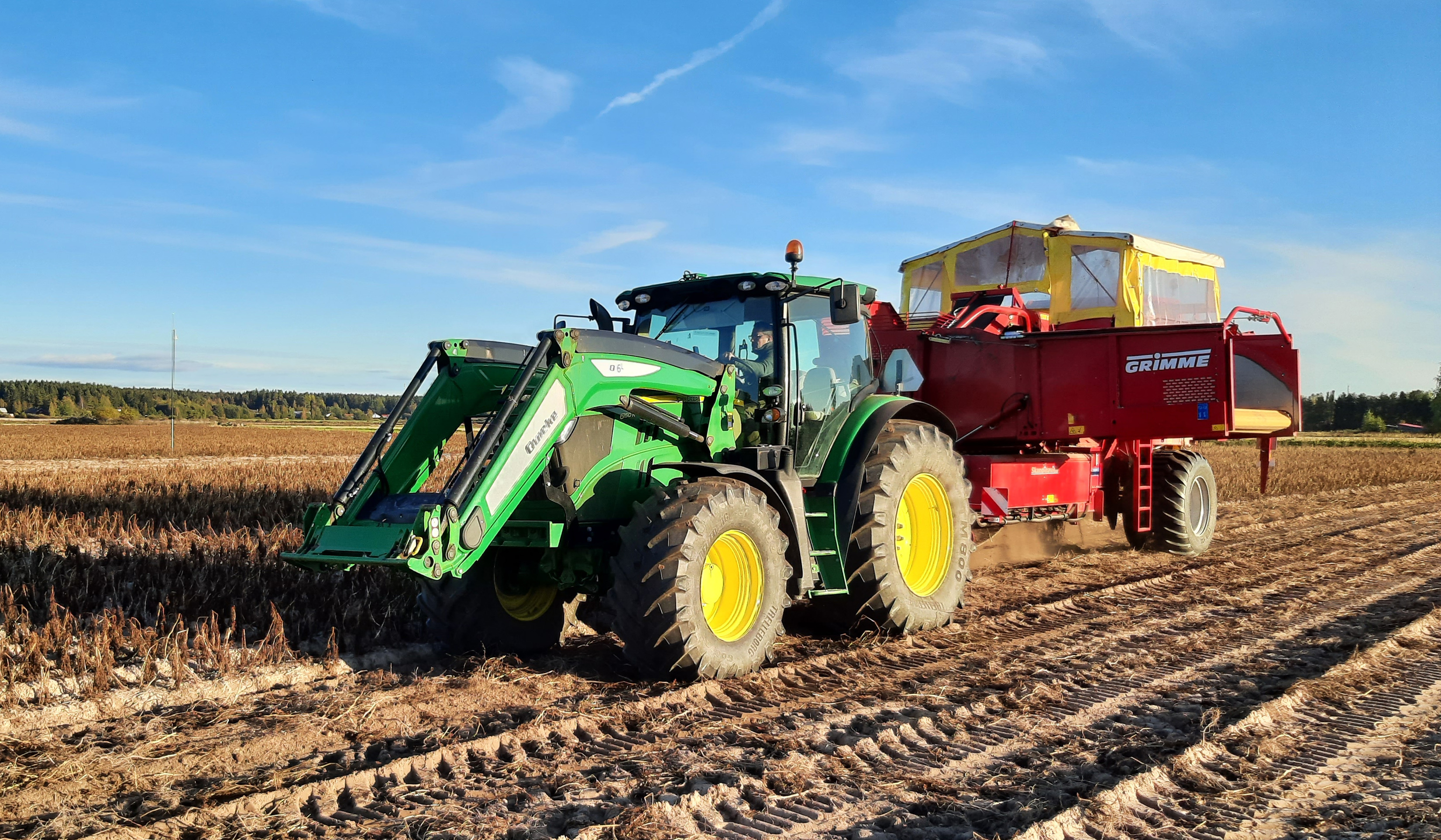 Farmers got their fields under control with Soil Scout

Product quality, quantity and operation costs constitute the golden triangle of profitability for a medium-size vegetable grower. Unpredictable weather is increasingly jeopardising all three, but reliable soil data can reverse that. Here's how progressive farmers successfully switched over from a guessing game into accurate and simple soil condition management - and surpassed the challenging growing season as winners.

By Tim Gilbert and Johannes Tiusanen

It’s well-known that Soil Scout was originally developed for managing agricultural land but has recently gained lots of exposure related to sports turf management. Media obviously finds famous sports venues much more fascinating than farms in the middle of the countryside, but on the fields no-one has ever heard of, Soil Scout plays an essential part in making our food production environmentally and economically sustainable.
In the end, it's not surprising that top end sports stadiums and commercial vegetable growers can benefit from using the same solution in their operations. Both use every affordable agronomic tool for producing the highest quality they can, with the lowest possible cost.

If you've seen a highly trained juggler toss pins with a scarf over his eyes, you've also got a glimpse of what it's like for a farmer, who tries to manage invisible issues with very tangible means. One can't see soil drought or nutrient deficiencies until it's too late and corrective measures should have taken place ages earlier. Traditionally, the nightmare has been tackled by experience and safe margins, like if irrigation should usually begin on the second week of June, better start at least one week earlier.
Fair enough, traditional methods have got us this far. But consumers no longer accept hairy carrots or scabby potatoes just because weather failed, and the even higher quality products must be farmed in an unpredictable climate on a thinner economic margin.
Over watering "just in case" is next to mortal for the profitability and has numerous practical drawbacks. Vegetable growers who intend to stay in the business need an improved strategy.

Ilkka Markkula in Ulvila, Finland is one of the farmers who have realised the unacceptable mismatch of irrigation cost and the arbitrarity of deciding how much to apply and when to begin. In the spring 2021, Ilkka installed 6 Soil Scout sensors into one of his potato fields; one in the tillage layer and another one in the subsoil at three carefully chosen locations.
"We really have done our share of irrigating on gut feeling. If one really wants to see when to irrigate and how that went, the present-day method to accomplish that is technology. That's just the way it is", he summarises his investment decision.
Unexpectedly, the first tangible benefit emerged immediately on the installation day, as the real-time data from deep underneath his topsoil revealed that the temperature was way too low for planting yet and the ground was also slightly too wet.
Potato plants will not start growing until soil temperature has reached 7°C (45°F) and planting earlier would have led to a prolonged exposure to soil-bourne diseases, aggravated by the wetness.
As the days progressed, he was able to focus on other urgent spring work while keeping one eye on his mobile browser to check the soil status, and switch into potato planting only when the conditions finally were optimal.
With both deep soil and surface soil sensors in place, he now knows exactly what condition his potato field is at throughout the year and can also push the growing season a bit longer by harvesting at just the right moment before autumn ruins the field's traffic-ability.

‍Nailing down the missing link in carrot production

Toni-Anton and Ilkka Mattila, farming the Sunniemi Manor fields in Harjunpää, Finland, have recently witnessed the impacts of both wetness and drought on carrot quality. Their earlier trials with tensiometers had left them with numerous broken and a few lost meters, with the learning that shuttling from gauge to gauge in fact makes things worse. The actual measurements seemed like a promising tool, but intensively prepared soil induced poor soil contact and the suction readings were unreliable.
"We are a small local producer, so our competitive edges are quality and taste. If carrots grow in dry soil, they'll taste bitter, and while looking for moisture the carrot will grow small hairy roots. If the ground is too wet, the carrots could start rotting at worst, or at least grow too big to fit into a standard consumer bag”, Toni-Anton explains.
After a first unsuccessful effort to move away from safe over watering, the decision to invest in a proper soil monitoring solution was easy, only with some doubts on how complicated the data interpretation would be. Once they were promised the needed support in setting up correct soil type specific threshold parameters, and that the graphs would have a simple traffic light interpretation of current water balance development, the deal was closed and equipment for instrumentation of two fields got under way.

As the season progressed, Finland saw all-time record heats with basically zero rain throughout June and July.
"Working in almost 30°C heat is not a walk in the park, and spending daily a hundred gallons of fuel for irrigating fields is not something that a farmer would do if there’s no absolute need for it", Ilkka Markkula says.
"This summer emphasised how important it is to irrigate just the right amount, preferably in two or three separate sessions. Irrigating a lot in one go when soil dries up, as we’ve used to do,  apparently makes topsoil too wet and causes flow-through. Irrigating too little, however, sacrifices the taste and form of the carrot. Another big surprise was to see how well the power harrowed trenches were able to stay moist despite the exceptional drought and heat wave we had", Toni-Anton Mattila concurs.
If inspecting soil moisture manually, weeks of "nothing happening" would wear out anyones enthusiasm for field observations, and then sudden changes inevitably fly under the radar. And even if they don't, a grower's fingertips can't reveal how drying speed shifts gears, not to mention evaluating if soil drought is at an acceptable level or has started to limit growth - which happens much earlier than one would think.

Soil Scout stays in the toolbox

"With the help of Soil Scout’s sensors and their very friendly customer service department, we were able to bury the sensors at the correct depths, read the data, and decide exactly when, where, and how much we should irrigate, as well as see the end results”, Toni-Anton Mattila summarises. "Next summer we will relocate the equipment to the next carrot fields according to our crop rotation."
"Because of the exceptional weather we had, without a real-time view into the underground, we would have suffered from severe yield losses. And it's not like weather is getting more stable in the future", Ilkka Markkula comments and intends to gradually expand the sensor system to four of his potato fields during the next three years. "Spreading the investment over a couple of years seems like the best option to move forwards right now, and by 'investment' I mean both the purchase as well as learning how to best react on the data", he concludes.

The growing season 2021 clearly showed that managing irrigation is more than simply deciding millimetres to apply, even if that's a part of it.
The first step towards cost savings was to decide when to start, as the strategy was to overcome the mid summer drought period with as few irrigation events as possible, naturally without sacrificing the growth.
The monitored soils were not drying up at a constant rate, in fact far from it. The tillage practices in place (power harrow on one field, spader on another) had successfully broken down the sandy soil capillarity, allowing the trenches to remain at field capacity moisture level for weeks despite the very dry and hot weather scorching the surface. After all, when water is not flowing down nor rising up, and plants are not yet transpirating, where could the moisture go?
Then all of a sudden, carrot root growth reached the trench core and in a matter of days moisture levels went into free fall, at first inside the trench but very soon also below the tillage layer. In fact, the next few days became a struggle to get irrigation up and running before soil would crash down to wilting dry.

On the potato field, first surprise was to notice how little moisture characteristics resembled each other in zones less than 100m apart, but how easy it was to create a simple irrigation sequence plan based on real-time data. Markkula clearly saw that zone 3 had the steepest moisture down-slope, and chose that lane for starting the watering, instead of pulling the irrigation gun across consecutive lanes from 1 to 4 like before.

Having moved on to zone 2 he was shocked to discover that his regular first dose had completely lodged in the topsoil, not reaching the root zone at all. Rushing through remaining zones as fast as possible couldn't really speed up the round, and when returning to zone 3 it had depleted to near wilting point with potato leaves already starting to curl. One abundant application freshened up the plants and fortunately the crop was not lost.
Next, zone 1 dried up, but based on the water balance data zone 2 could in fact wait for a few more days. The irrigation sequence was reshuffled accordingly, and the remaining irrigation season was continued by always relocating the irrigation reel to the driest lane.
On the carrot field, the first pull on the irrigation reel did not produce a good step response either, but for a whole other reason. A strong wind from Southwest had risen during the night and thrown most of the sprinkler water off by 10-20 meters onto the adjacent lane.
When natural rains finally arrived in late July, it was astonishing to observe how topsoil in the trenches really soaked up, but sensors 30 cm deep showed absolutely no signs of any increase in moisture content. Although the ongoing, less intensive rain kept topsoil wet, more irrigation was needed. Watering seemingly wet soil was a new experience and surely didn't feel like saving in irrigation costs, but at times data driven farming does lead to counter-intuitive actions. The crop was consuming more water than the rains could deliver.

Smart actions on the carrot field

1. Realise that the trenches were able to stay moist despite heat wave and scorched topsoil
2. Urgently begin irrigation when roots suddenly started depleting deeper soil
3. Reschedule irrigation when wind had pushed sprinkler water to next lane
4. Fine tune dosage on each zone and prevent flow-through
5. Continue irrigation based on deep soil drought despite modest rain

Smart actions on the potato field

1. Focus on other spring work while monitoring potato soil temperature
2. Begin irrigation when the first zone dried up
3. Speed up irrigation and increase rate as watering was falling behind
4. Stretch irrigation capacity by skipping zones with adequate moisture
5. Push growing season as far as deep soil sustained traffic ability